A review of Apple's passkeys implementation

It’s been a few months since my last posts about Apple’s passkeys implementation (here and here). Passkeys officially launched with iOS 16 on September 12th, and macOS Ventura betas have been stable enough that I’ve been able to capture some nuances of this functionality across Apple’s passkey “ecosystem”.

## iCloud Keychain sync is a requirement

Apple wasn’t kidding when they said that iCloud Keychain sync needed to be turned on to use passkeys. On both iOS 16 and macOS Ventura, Safari will block you from using the platform authenticator at all if syncing is not turned on (or you just aren’t signed into an iCloud account): 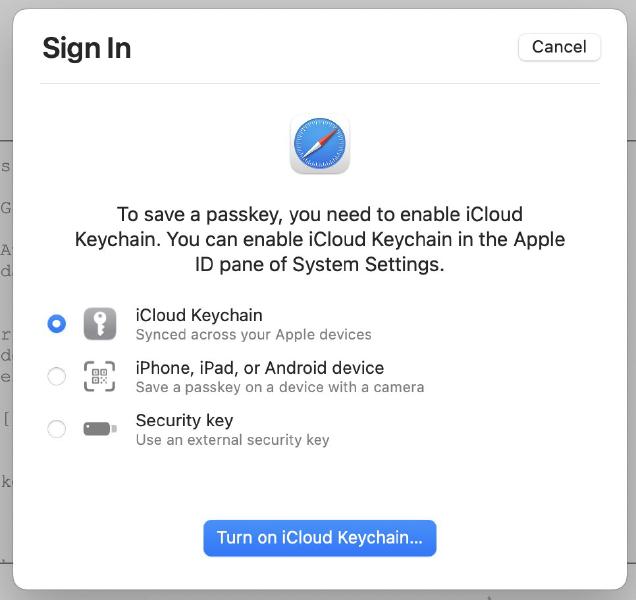 ### Regarding the use of “legacy” platform authenticator credentials

Based on internal testing, it seems to be the case that platform authenticator credentials registered on iOS 15 can still be used on iOS 16 even if iCloud Keychain sync is disabled. There was concern that passkeys’ requirement that sync be enabled would prevent use of these now-called “legacy” platform authenticator credentials (Apple’s term, not mine. The pedantic name for these is “single-device credentials”), and that it would mean users on devices with sync disabled via personal preference (or company policy) would get locked out of auth. That does not appear to be the case.

It’s worth calling out here that allowing a previously registered user to register a passkey after upgrading to iOS 16 will see iOS opportunistically replace the “legacy” credential with a synced passkey. From that point on iCloud Keychain sync will become a requirement for that user to subsequently authenticate.

Noteworthy improvements in WebAuthn support between July and now include the replacement of the "cable" transport with the official "hybrid" transport. I’m also happy to report that the credProps extension is now fully supported as well so you can be sure that discoverable credentials are being created:

And Conditional UI authentications now correctly return uv: true instead of the uv: false they reported back in July as expected when user verification is required.

So far there are two remaining issues with passkeys in iOS and macOS Ventura:

Attempting to trigger a modal UI auth after initializing conditional UI in the background will raise a NotAllowedError on the modal UI attempt when you try to abort the first conditional UI call. However the OS will go ahead and prompt you for a WebAuthn interaction anyway; the Promise returned from the modal UI navigator.credentials.get() call will never resolve with a credential, though, because it’s already been rejected.

I prepared a basic recreation of the issue over on GitHub, which was then submitted as feedback to Apple on October 2, 2022 about this as FB11639511.

In a strange turn of events, Safari 16.1 on macOS Ventura Beta 8 won’t reject the Promise returned from a conditional UI call to navigator.credentials.get() at all. This means if you wrap it in a try / catch the catch won’t evaluate, so you’d never know when the conditional UI request is aborted (it should be rejected with an AbortError.)

I never submitted this as feedback to Apple because a few others in this space already did.