A recent post in the fido-dev Google Group included steps for previewing work Google is doing with “cloud-assisted BLE” pairing, or caBLE. Briefly, Google is working on a way of pairing Android devices to bluetooth-equipped computers in a way that sidesteps the usual Bluetooth pairing process most of us suffer through when we pair our headphones to our laptops.

The steps listed on the fido-dev post are specifically for testing out caBLE v2 in the context of WebAuthn. While the technology is still very much a WIP, it’s built out enough to allow for WebAuthn registration and authentication ceremonies. I decided to take it out for a spin to see what kind of extra work, if any, RP devs might need to one day be aware of to implement support for this.

Support for caBLE exists today in Chrome Canary Version 93.0.4530.0 and up, both on Android, and macOS, Windows, and Chrome OS devices with Bluetooth. And in a surprising bit of backwards compatibility, this version of caBLE works with Android devices running Android 7!

Setup instructions below are copied verbatim from the fido-dev post above:

### Setting up your Android device

### Setting up your macOS, Windows, or Chrome OS device

After setting everything up I spun up the example project I maintain within my SimpleWebAuthn project and used it for testing. In lieu of this, you should be able to experience this yourself with a site like this WebAuthn Test App.

NOTE: caBLE is a “cross-platform” authenticator attachment. It will not be available if authenticatorAttachment is set to "platform" in registration options.

Select “Pixel”, at which point Chrome will instruct you to check your phone for a notification:

Unlock your Android device to receive that notification asking you to “verify with this phone”:

Tapping the notification brings up a full-screen view with a lock and spinning color wheel while Android is “connecting to your device.” A second later, a half-height “Verify your identity” popup appears prompting you to interact with your device’s biometric sensor (or enter a PIN, if a biometric sensor is unavailable):

Once you complete the biometric gesture/PIN entry, you’re done! Go back to Chrome to confirm that the WebAuthn registration completed successfully: 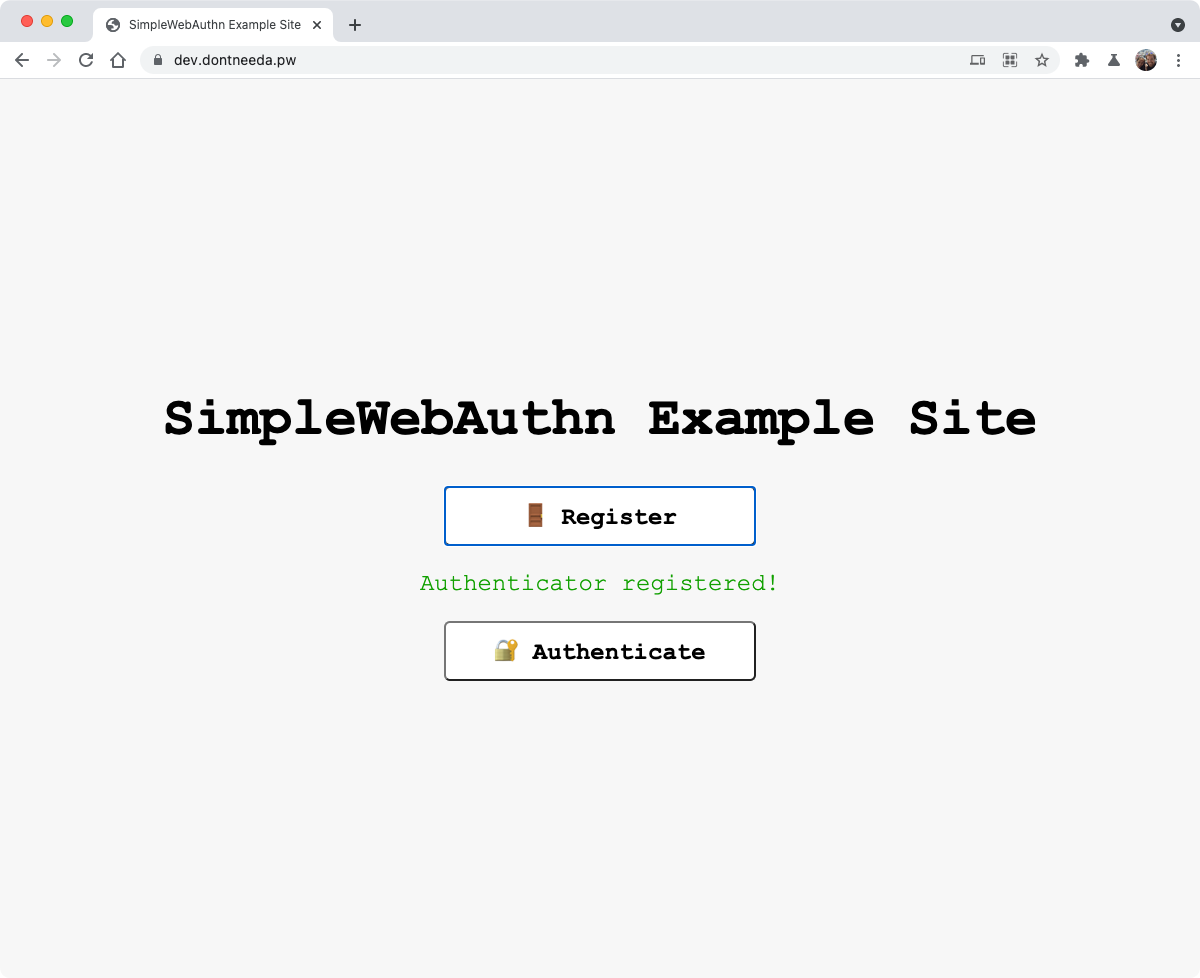 And that’s it. In just a few clicks, without any prior pairing, your phone and computer are able to securely connect and interact on-demand thanks to Google and their “cloud-assisted BLE” network transport.

I wanted to document the entire WebAuthn authentication flow as well but honestly it’s almost identical to registration. The only difference I noticed was slightly different wording on the Android notification - it says “use this device to sign in” instead of “register this device for signing in”:

From a technical perspective there’s nothing too surprising coming out of this version of caBLE-based registration (SimpleWebAuthn Debugger link):

One of WebAuthn’s notable “weakpoints” is its lack of an account recovery story. After all, what good is a credential public key if the authenticator containing its paired private key is lost or replaced? Private keys can’t be transferred to a new device by design. It’s the responsibility of RP developers, then, to architect and implement sufficient out-of-band account ownership verification processes lest their users permanently lose account access because they “failed” to upgrade their phone without registering it while they had access to their old device (because obviously a user should know to do this! /s)

Previews of technologies like Google’s caBLE v2 and Apple’s Passkey both seem to try to tackle this issue by keeping credential private keys in the cloud. After all if private keys are stored in the cloud then Google and Apple are free to orchestrate access to them from any user’s device, even if the user no longer has access to the device they originally completed WebAuthn registration with. It’s unclear to me from this experiment with caBLE v2, though, how Google will maintain the user’s private keys: mentions of “syncing” in the setup instructions give me the impression that Google might actually synchronize the private key between devices. This may be inaccurate as caBLE is not well-documented, probably due to it’s in-development status.

One final thought: it’s worth mentioning how fundamentally cloud-based storage of private keys breaks the FIDO security model that assumes private keys never leave a secure device. Conversations have already popped up in the FIDO and W3C communities about this, and discussion will only intensify as companies like Google and Apple continue striving to strike that fine balance between security and usability.